#AE25 - Rise Of The Tyrant merch bundle out now!

In celebration of our 25th anniversary, we’re bringing you strictly limited merch bundles for every studio album we've ever released. The exclusive merch bundle for RISE OF THE TYRANT (2007) is OUT NOW - get your bundle here: http://bit.ly/AE25Years! 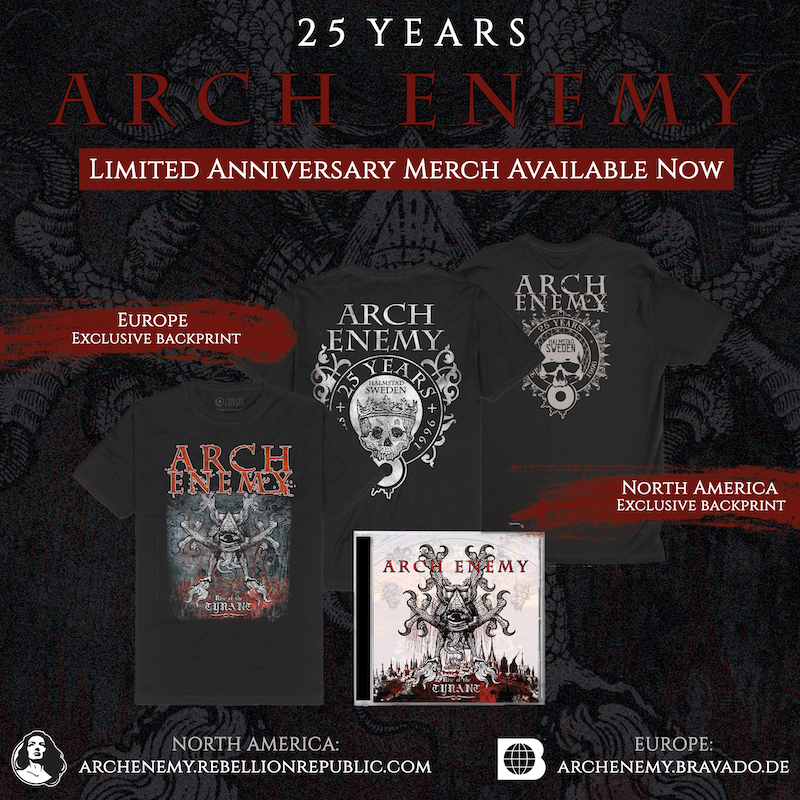 "After wrapping up the “DOOMSDAY MACHINE” tour in Latin America we headed home to Sweden and made the sudden decision to bring back Chris on guitar. It was with mixed feelings we let Fredrik Åkesson go, as he had been a great addition and nothing but cool to work with during the two years he toured with us. After his departure Fredrik quickly landed on his feet as a member of OPETH, I was delighted when I heard that news. Anyway, Chris wanted back in, and it seemed like the right thing to do for the band and the fans at the time. Myself and Daniel had been writing and demoing a lot of music but when Chris came back into the picture we still had time to develop some of the songs even further with his input.

After making a few albums with Andy Sneap in the U.K., we thought it could be interesting to go back to Fredrik Nordström and try to capture some of the vibe we had with him twiddling the knobs on our first records - and in some ways we succeed in doing so! The studio had moved to a new location in the countryside so the atmosphere was not the same as before in that regard, but Fredrik hadn’t changed! I really liked his approach to producing Angela’s vocals and he was always great with guitar tones. It was a pretty straightforward and easy album to record. In the end though, I remember we were not entirely happy with the mastering, but I just listened back to it now for the sake of writing this and I must say I thoroughly enjoyed it. I like how wild and guitar heavy it is!

The two videos we shot for “Revolution Begins” and “I Will Live Again” marked the first time we worked with director Patric Ullaeus, a relationship that has lasted to this day.

The spoken intro to the title track is taken from the controversial cult film CALIGULA (1979), with actor Malcolm McDowell as Caligula proclaiming himself a god in front of the Roman Senate. We licensed the rights to use that sample from Penthouse Magazine for a few hundred bucks.

Another movie reference can be found in the song “The Day You Died”, with the lyrics being inspired by the Japanese animated war tragedy film “Grave of the Fireflies”(1988).

We enlisted Niklas Sundin to do the artwork, Niklas had been responsible for designing a lot of artwork for us including the “Wages of Sin” and “Anthems of Rebellion” album covers, and he created another one of my favourite artworks this time. We once again had Per Wiberg come back in and play some keyboards on the album, although we actually forgot to credit him on the album (!).

Upon the album's release we toured with MACHINE HEAD in the USA, Australia and Europe and then went off on our own to Japan and China (our first show there). We continued touring and in March 2008 we returned to Japan again for a full Japan tour and filmed the “TYRANTS OF THE RISING SUN” (2008) concert film at Studio Coast, Tokyo. I’m glad we have that moment in time immortalized with that DVD/CD/vinyl release, The setlist at that time featured a lot of songs off “RISE OF THE TYRANT”.

Even if the “RISE OF THE TYRANT” album maybe didn’t spawn any big “hits” for us (although it was a major record for us in Japan), I have to say it’s a special one as far as guitar moments are concerned. I think some of our best riffs, solos and melodies are featured here. “Intermezzo Liberté" is an instrumental piece I enjoy playing live on tour to this day, and after revisiting this album I now wish we’d play more songs off this record again in the future.

So, in 2008 everything was seemingly running smoothly for ARCH ENEMY now but there was yet another dark cloud on the horizon…"