Extreme metal giants Arch Enemy announce their U.S fall tour alongside fellow metal heavyweights GoatWhore and newcomers Uncured. The tour follows the release of Arch Enemy’s chart-topping tenth studio album, Will To Power, released in September 2017 via Century Media. The 22-city tour kicks off on September 28th in Providence, RI, hitting major markets along the way, before culminating at the iconic Starland Ballroom in New Jersey on October 27th. Tickets go on sale May 4th 10AM local time at www.archenemy.net/tour.

On the upcoming tour, Arch Enemy’s founding guitarist and chief songwriter Michael Amott says: “After our hugely successful co-headline US/Canada trek with Trivium last fall, we are very much looking forward to returning to North American soil! This time we’re hitting a slew of cities and markets we haven’t been to in a while and we can guarantee that it’s gonna be an insane Metal party!”

Released in 2017, Arch Enemy’s tenth album was the ultimate statement of heavy metal supremacy from a band that are still growing in stature year over year. The critically acclaimed album is the first the band recorded with their current line-up: Alissa White-Gluz (vocals,) Michael Amott (guitars,) Jeff Loomis (guitars,) Sharlee D’Angelo (bass,) Daniel Erlandsson (drums). Achieving longevity is the toughest challenge that faces any band, but Arch Enemy have long since established themselves as a permanent fixture on the global metal scene and continue to uphold and celebrate the heavy metal code. 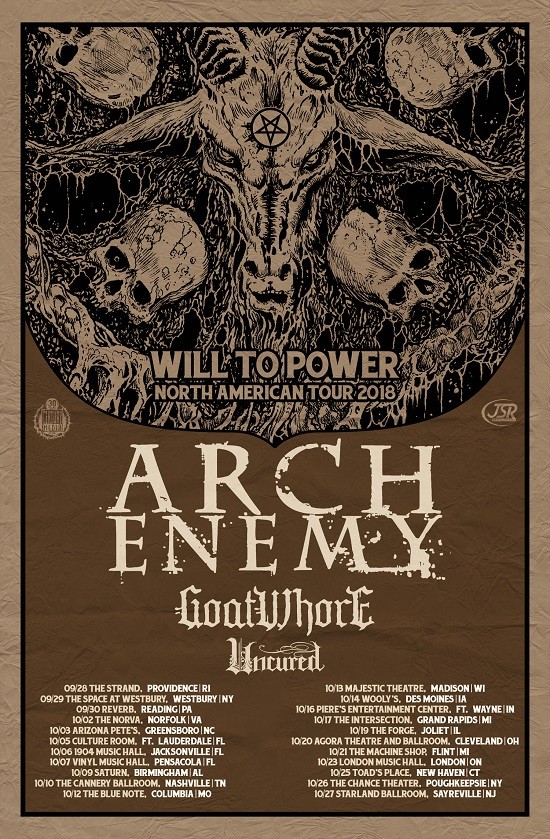